The central idea of the project is the prototype combination of the tree Trimo modular units in a way so they form an active layout which would provoke social interaction and creative use of both indoor and outdoor spaces generated. The three volumes stand on different positions depending on their content and are aligned in such a way to maximize open spaces between them, as well as providing accessibility and structural support one to each other. The result is a dynamic formation that interacts productively with its surrounding park and urban elements, while providing the potential capacity for various activities from the users. 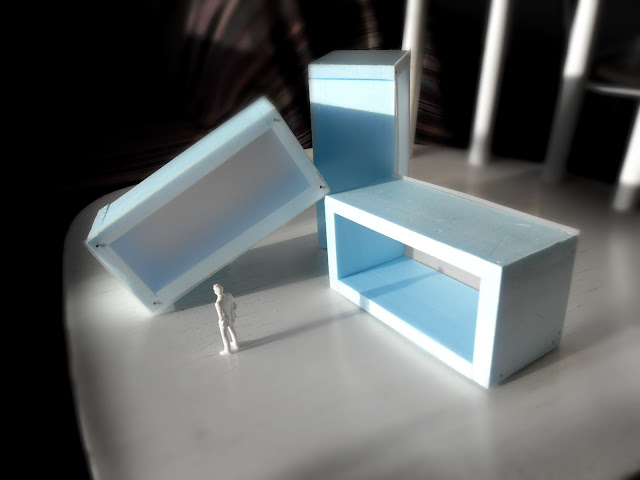 The program of the project is hosted on the three modules and the three mayor ‘plazas’ that are created between them. The first module stands in a typical horizontal position containing a closed interior space for social meetings, café and relaxation. It has the big elevation transparent with glass, facing towards the city. The second one stands in a vertical position and functions as a symbolic tower that shows ‘presence’ of the bike base and the internet signal. It is divided in two floors and offers spaces for small groups of people to use their laptops and the wi-fi connection. This module has a big transparent façade facing the park, and another one used as a climbing wall. The third one is placed in inclination and functions as a big staircase that provides accessibility to the second floor of the module two and the roof of module one. It is also facing to the park and it would provide the capacity to operate also as a small amphitheater for collective gatherings or performances. Underneath this module there is a shaded parking for bicycles.   In the middle of the project is created a covered triangular space which provides the facilities and tools to repair bicycles. One of the three ‘plazas’ created hosts the electrical bicycles, and the rest two ones would contain trees and vegetation. 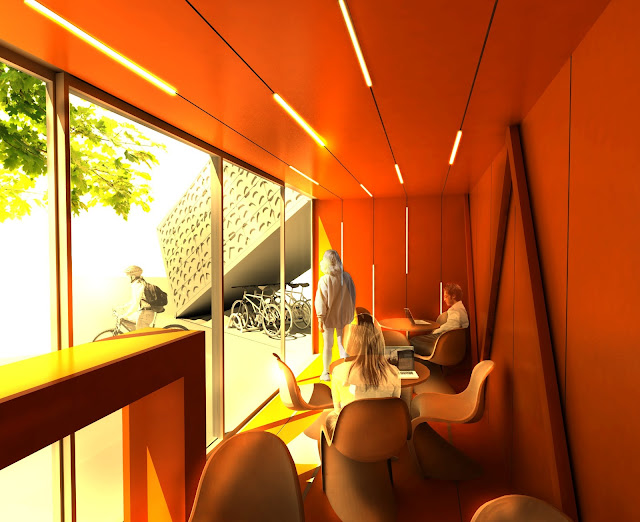 All the materials used are of Trimo. The exterior skin of the modules is composed of white Trimo ArtMe panels with an abstract voronoi pattern, which ‘reflects’ the organic profile of the surrounding nature. The interior spaces are cladded with Trimo Qbliss One panels placed in vertical and horizontal positions and in three different colors: orange, gold and yellow. The transparent surfaces are of Trimo Qbiss Air facade skin placed on aluminum sliding doors. The roof of the third module provides an ideal place with the right inclination (30%) facing to the south  for the Trimo EcoSolar PV panels to generate maximum solar energy. 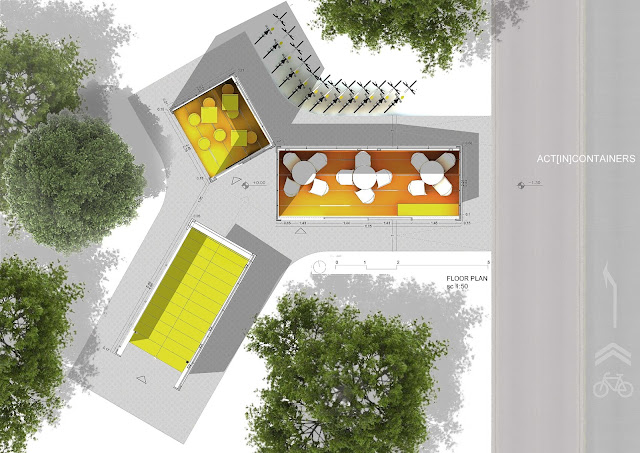 The proposal is following sustainable design principles by combining correct orientation, high quality materials and solar panels. More specifically, in the north facades is provided sufficient protection by the closed insulated skin and in the south façades the wide openings capture the sun rays, creating a passive system with solar energy gains. The energy produced by the solar panels oriented south and placed in inclination 20-30% is spent carefully by the LED lightning and the charging needs for the laptops and the electrical bicycles.  Solar energy production and reduced consumption aspire to achieve and equilibrium of the energy balance of the project’s system.

The urban presence of the project is enhanced by the programmatic density, the accessibility and the prototype combination of the Modular units. It’s unconventional combination of the modules provokes people’s curiosity to visit and use. Users are being offered a flexible program and various open spaces to unroll their creativity and requirements. Act in Containers, or Acting Containers?