''The Rack of the Future'' is our contribution to The Untouchables exhibition that is part of the Change. Architecture Cities Life festival in Rome, and suggests a radical future perspective for intervention in the city's Piazza del Quirinale, more information HERE 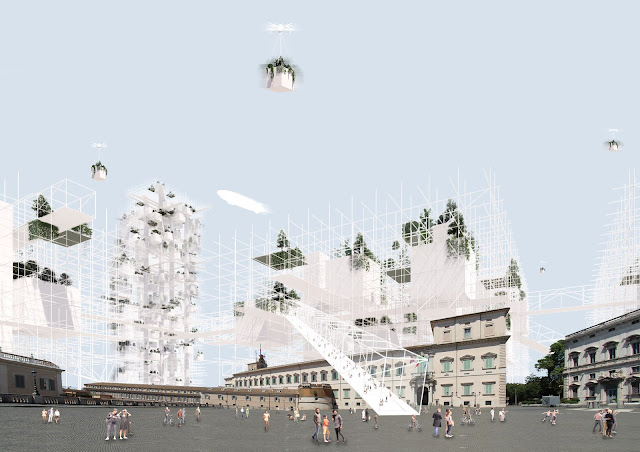 As a historic city, Rome enjoys an incredible body of well-preserved monuments, buildings and plazas that once taught innovation and responded radically to the political and architectural preoccupations of their era, with many of them still being relevant today. However, the blessing of heritage has gradually turned Rome into a museum of itself, raising questions about its future development and appropriation by the future generations.

The Rack of the future suggests creating a generic, informal, cheap, temporary and ever-changing new city on top of heritage which is specific, formal, precious, permanent and occupies most of the ground floor terrain of the city. The Rack – similar to scaffoldings - is modular, light, easy to build and recyclable. It can carefully touch on the historic gardens, plazas and palaces and rise vertically and diagonally into the sky, which is free and symbolic of culture, movement, migration, change and information. The Rack could grow with the city’s demand for development and innovation, connect history and future, migrate with the birds, change with the clouds and connect people, inaccessible places and information similarly to the way we already transfer data.  Through its porosity and modularity is can regulate its density and allow for sunlight to cross it through, therefore making it possible to be green and connect to the existing gardens of the city.

A characteristic urban space of historic Rome, Piazza del Quirinale is bound by the monumental Palazzo del Quirinale, currently serving as one of the official residences of the President of the Italian Republic. The eleventh-largest palace in the world in terms of area, the Quirinal Palace and its beautiful gardens could become and accessible sequence in the Rack’s three-dimensional network, extending diagonally and highlighting the merge of Rome’s old and new urbanity.

The Rack is inspired by the radical urban utopias of the 1960s and 70s, such as the Ville Spatiale of Yona Friedman and the provocative – yet pioneering - visions of the Italian radicals Archizoom and Superstudio. It suggests that ideas such as mobile architecture, vertical cities and big gestures in urbanism could be symbiotic to heritage and landscape, especially considering the technological advances of our era.
Thanks to
TARI-Architects
for the invitation, organisation and contribution, as well as the other 10 young offices that also contributed their vision for the city of Rome!