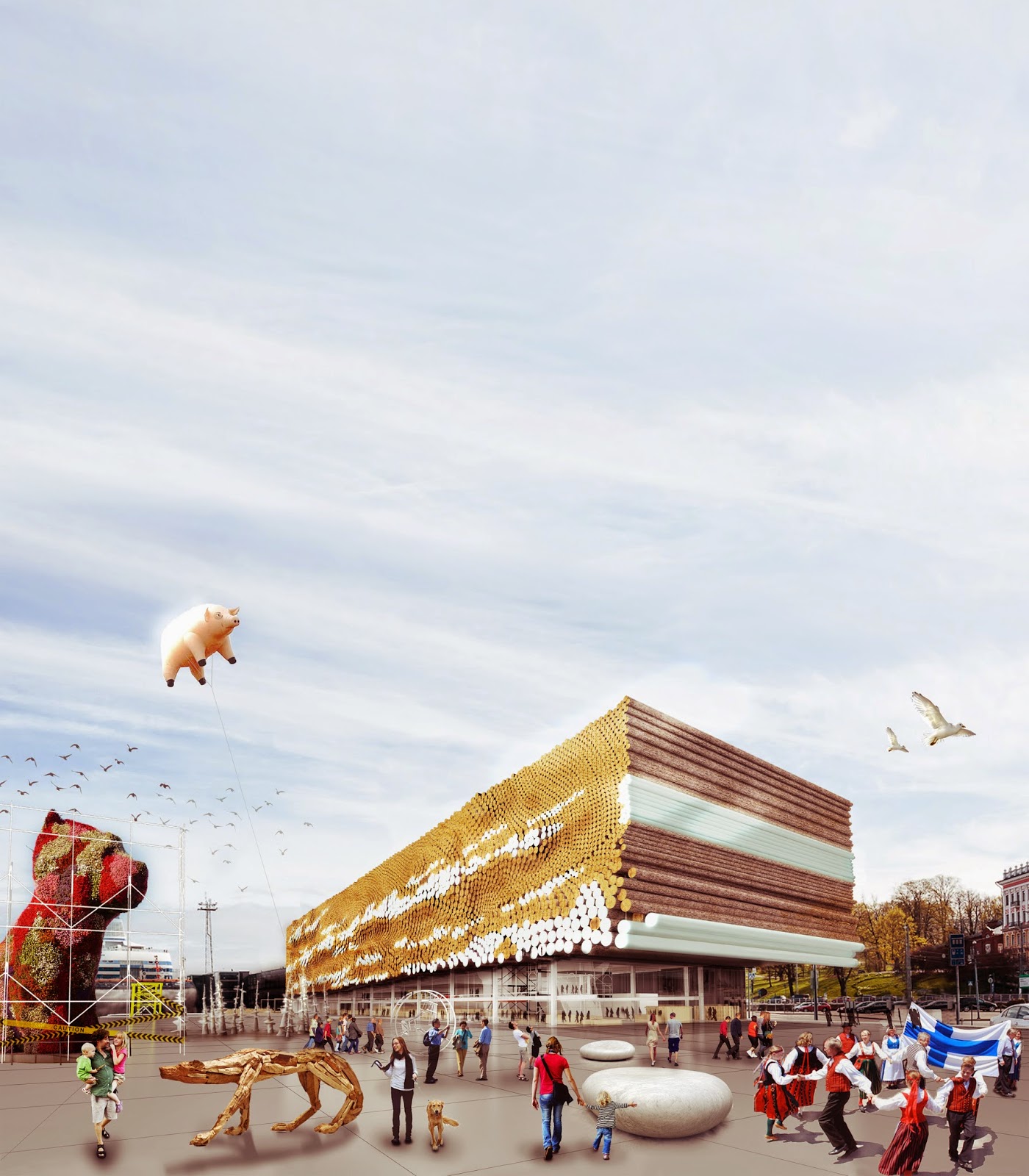 The Guggenheim Bilbao had an immense influence on the post-industrial metamorphosis of the city of Bilbao. But perhaps inevitably it was the peak and the start of decay for the Guggenheim hegemony over arts.
The Guggenheim cultural hegemony started in New York almost eight decades ago, with the conception of a museum that would bridge artists’ production with the city. As a landmark of western modernity’s crescendo, the Guggenheim in New York would connect art and the city through an elevator and a continuous ramp.
Increasing its influence, Guggenheim would follow New York’s financial and cultural shift towards postmodernism and global management. Gradually the museum would serve as a manager of commercial operations between the mainstream cultural reproduction and clients. While art used to be exhibited inside museums for the city, the building of the Guggenheim Museum in Bilbao would then go a step further, itself becoming an exhibit inside the city. 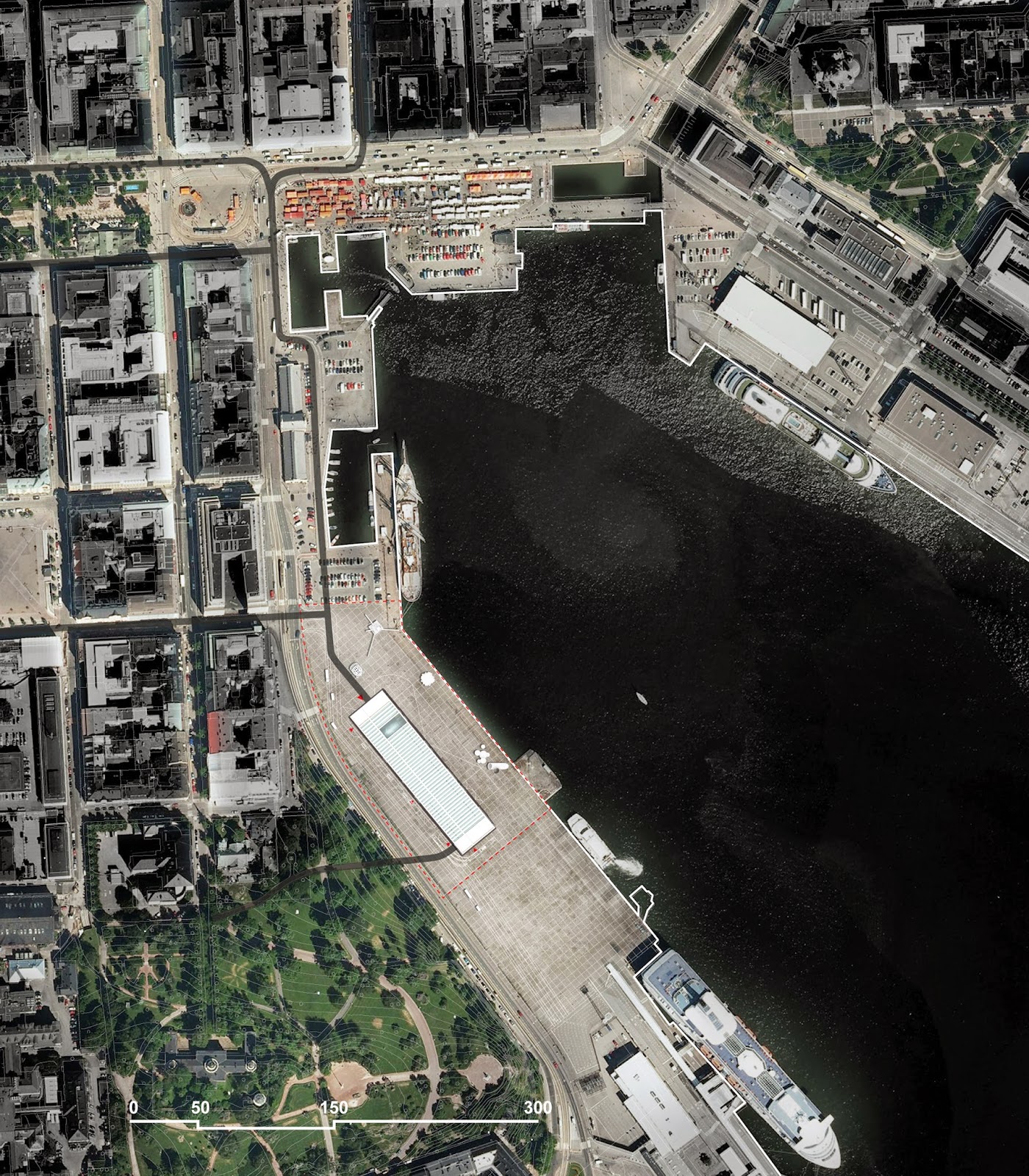 Western cities changed dramatically during past decades of neoliberalization and globalization of the free market economy, they turned from production machines into consumption paradises. Bilbao is such a paradigm of a change. Once a factory of production of capital and growth, it turned into an urban site of capital reproduction.
From capital production into urban reproduction, the market economy nowadays employs culture and the city as the labour force which gets exploited to extract a surplus of capital. The city itself becomes the market of commerce. The city acts as the museum and architecture as the exhibit.
How would it be the city to provide the density to the infrastructure of production - the museum as a factory - for the common production of the artistic program by the urban subject together with artists?
In a way urban density, cultural program and public infrastructure should blend and serve as one. They could produce and consume arts inside the urban continuum, on the ground level.
In the case of Helsinki, the urban condition of the given site - the city itself- could thus become the factory on the ground level, covered by the roof, which is stuffed with infrastructure - the museum - and in between arts are composed, consumed, digested and defecated from and for the artist and visitors - the urban subject. 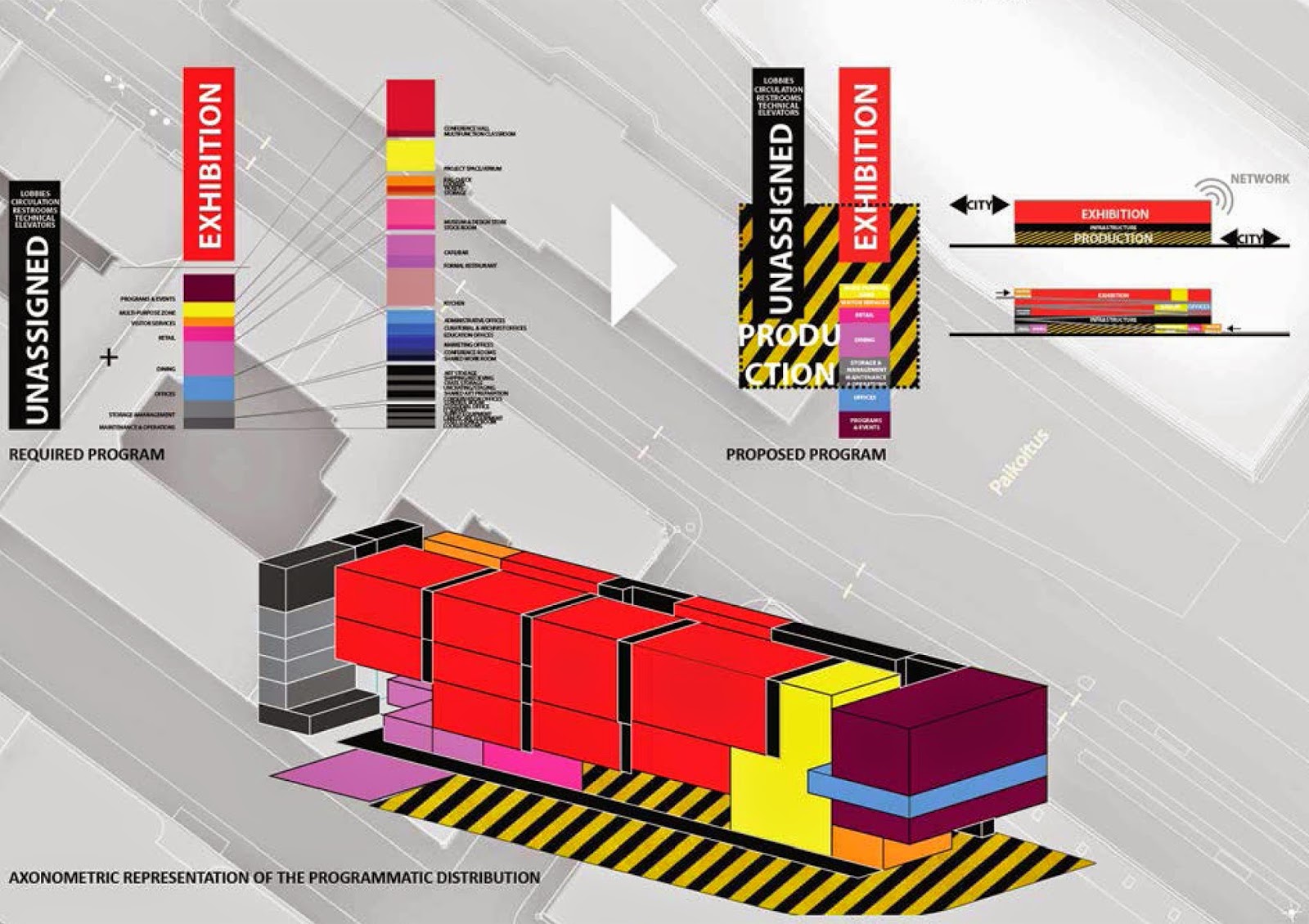 Proposals for the Guggenheim Helsinki should suggest a building that would be ultimately liberated from the notion of commerce; to be productive as well as non-architectural in the way that Guggenheim Bilbao is, to serve as a spatial apparatus, to shelter and provide infrastructure to the production of arts happening within urbanity, on the street level.
Beyond its managerial role of commercial and profitable artistic fetishism, Guggenheim of the twenty-first century could pursue its future survival into the production of an artistic subjectivity based on the emerging physical and immaterial networks that compose the contemporary urban condition. 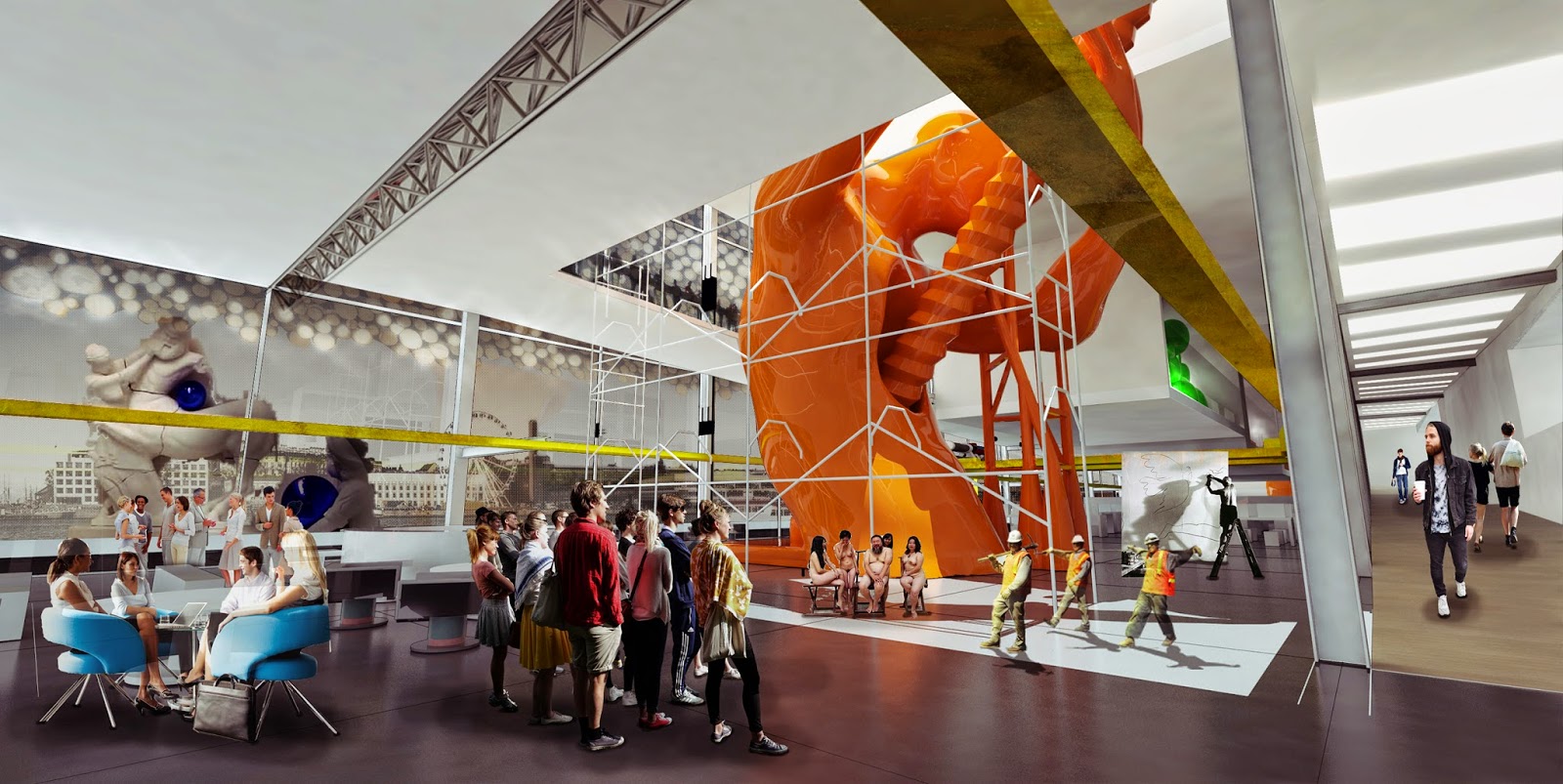 Such inclusive network-produced subjectivity would only match the urban continuum and the structures of Guggenheim Museums under processes of cultural production: from culture/management/client to urban subject/common production/global networks. 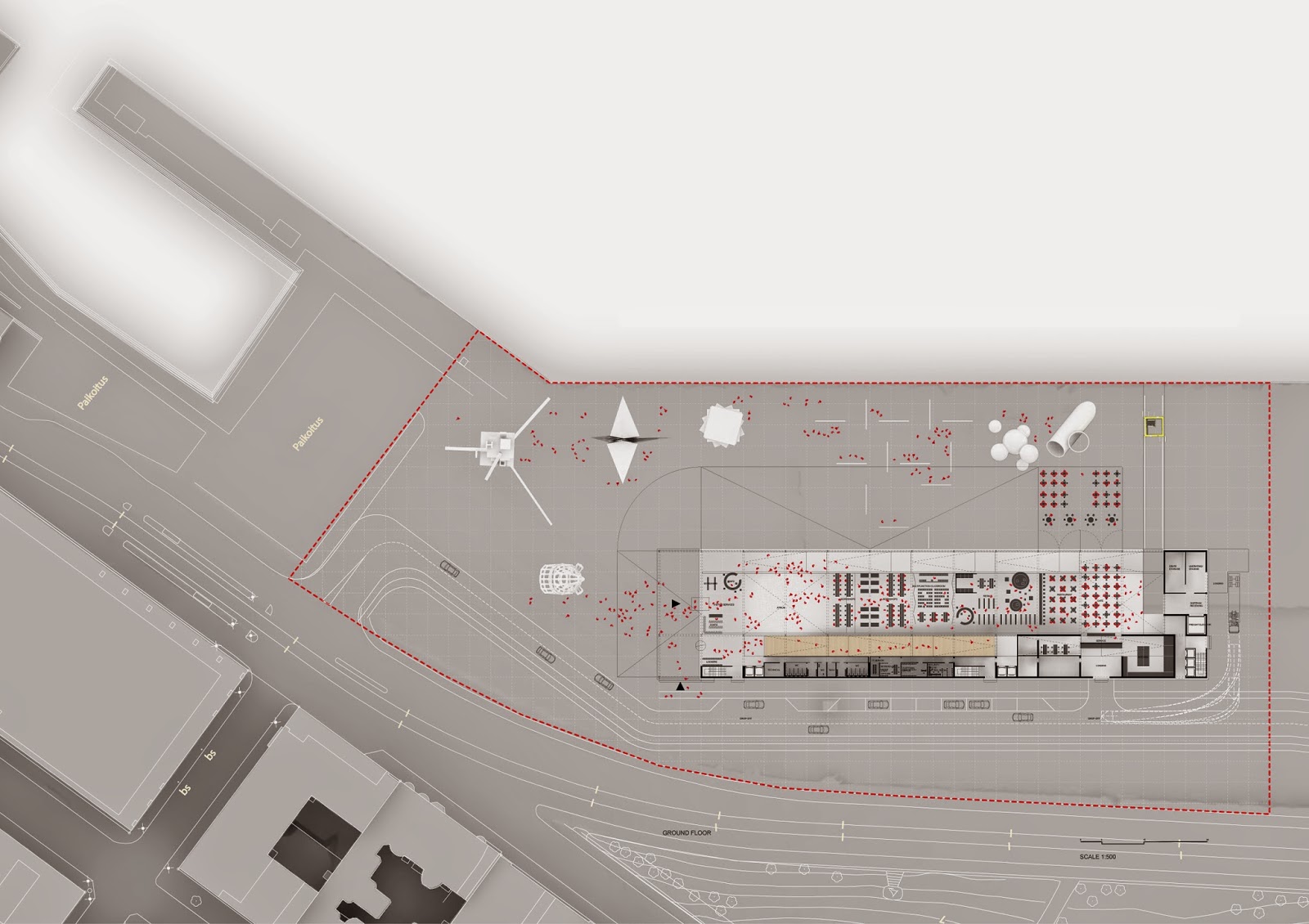 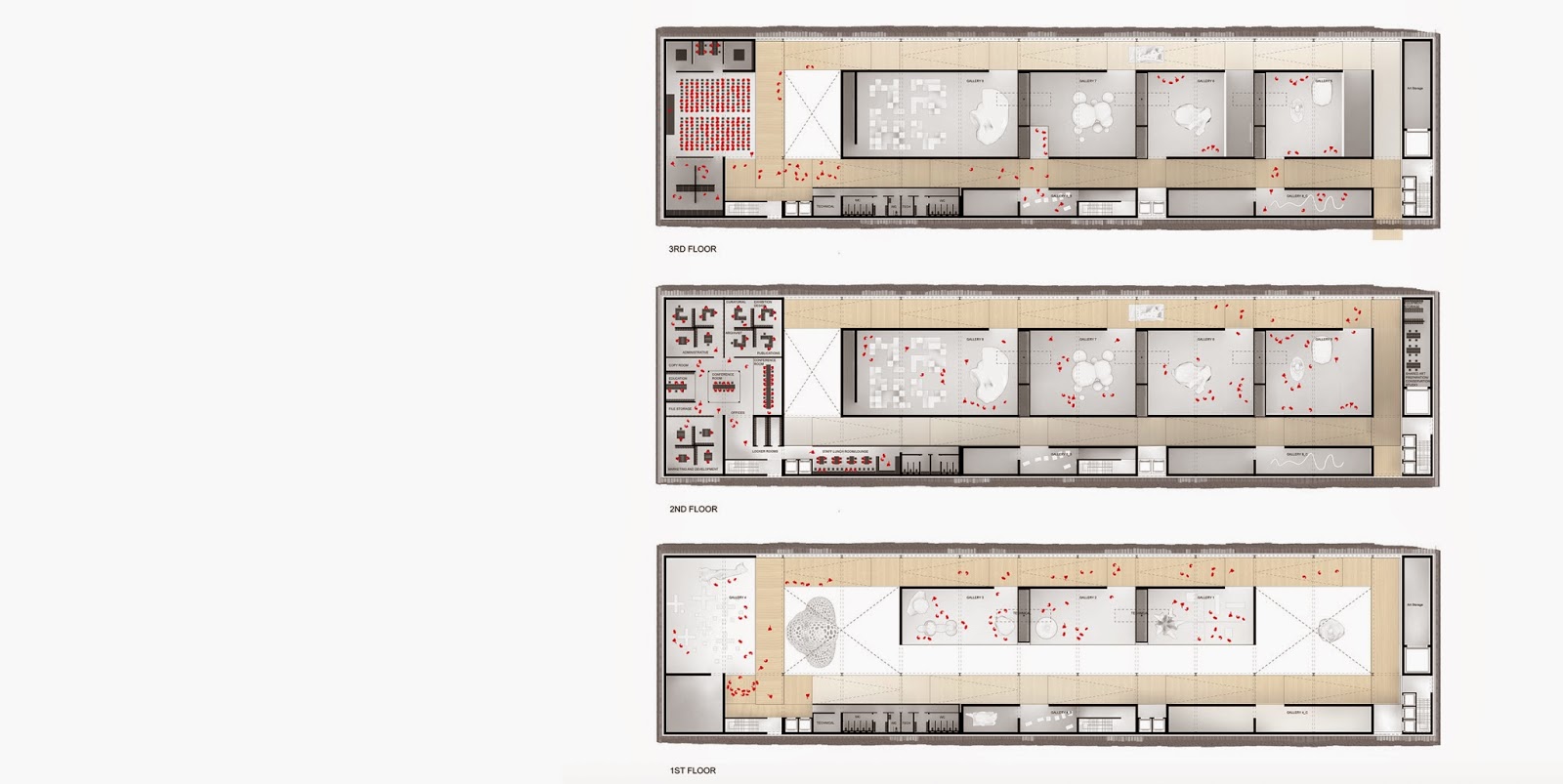 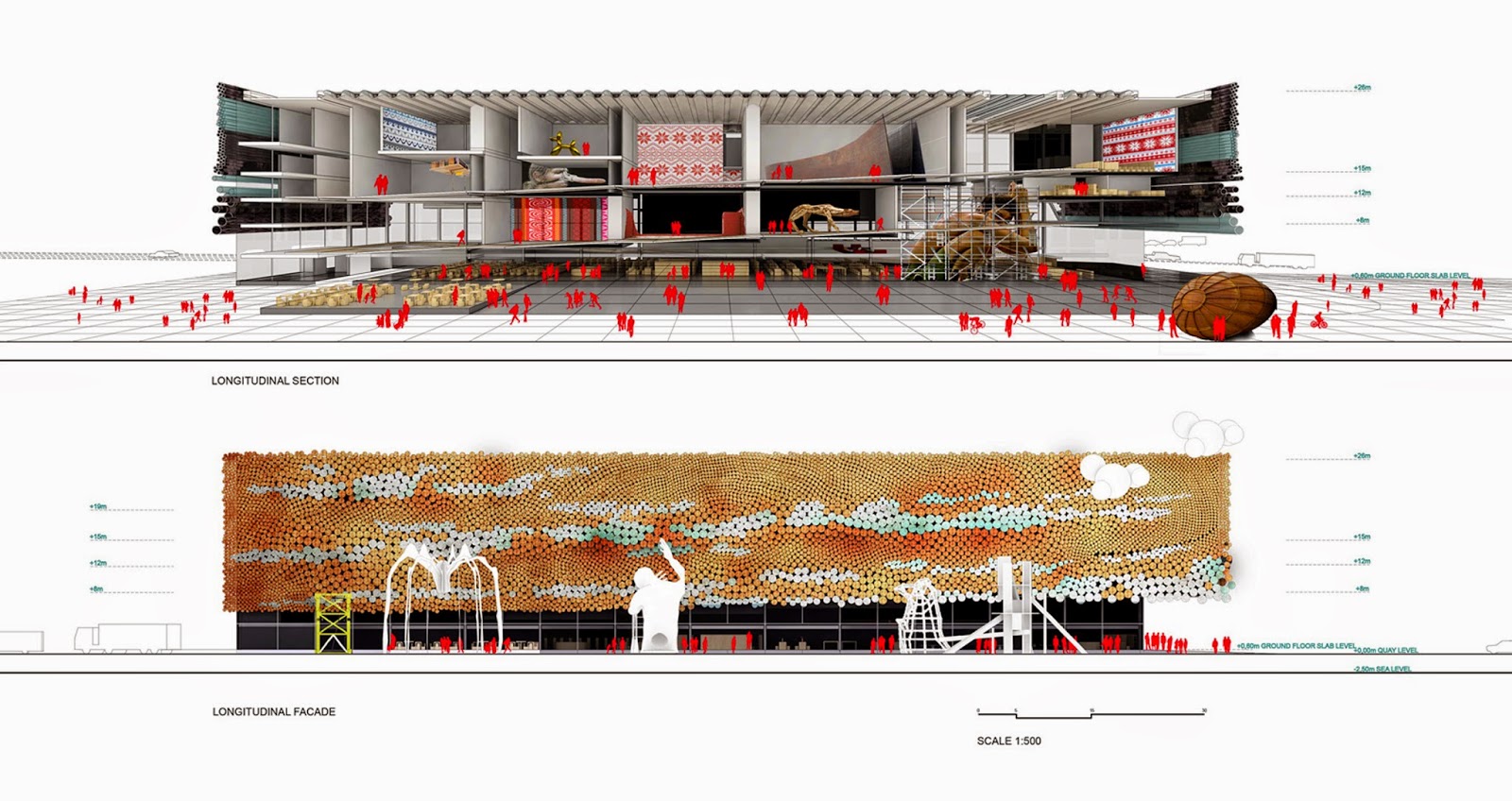 CONCEPT
The proposal of the Guggenheim Museum Helsinki suggests a radical urban facility for the production and exhibition for international and Nordic contemporary Art. The building proposed fits the required program inside a modest orthogonal volume which is dressed with row timber trunks, to fit the Tahititornin Vuori Park in the background and take advantage of Finland’s timber resources. The rough semi-transparent volume of the building contains the exhibition galleries and generic program, and floats above the transparent ground floor which opens to the city and contains spaces and infrastructure for the production of Arts, in common by the artists and the urban subjects.
The ground floor is fully accessible and in fusion with the city’s urban continuum, thus sheltered by the ‘spatial roof’, which hosts the galleries and exhibitions of the museum, the <<history of Art>>. In such a way, the production of contemporary Art, the <<present and future of Art>>, happens on the street level, in the interior and exterior spaces of Guggenheim, exploiting the port’s and its own facilities and generosity of urban space.
The compactness and spatial efficiency of the building proposed, releases the outdoors spaces of the site for large scale artistic installations and generous flows of people and art from and towards the port of Helsinki. 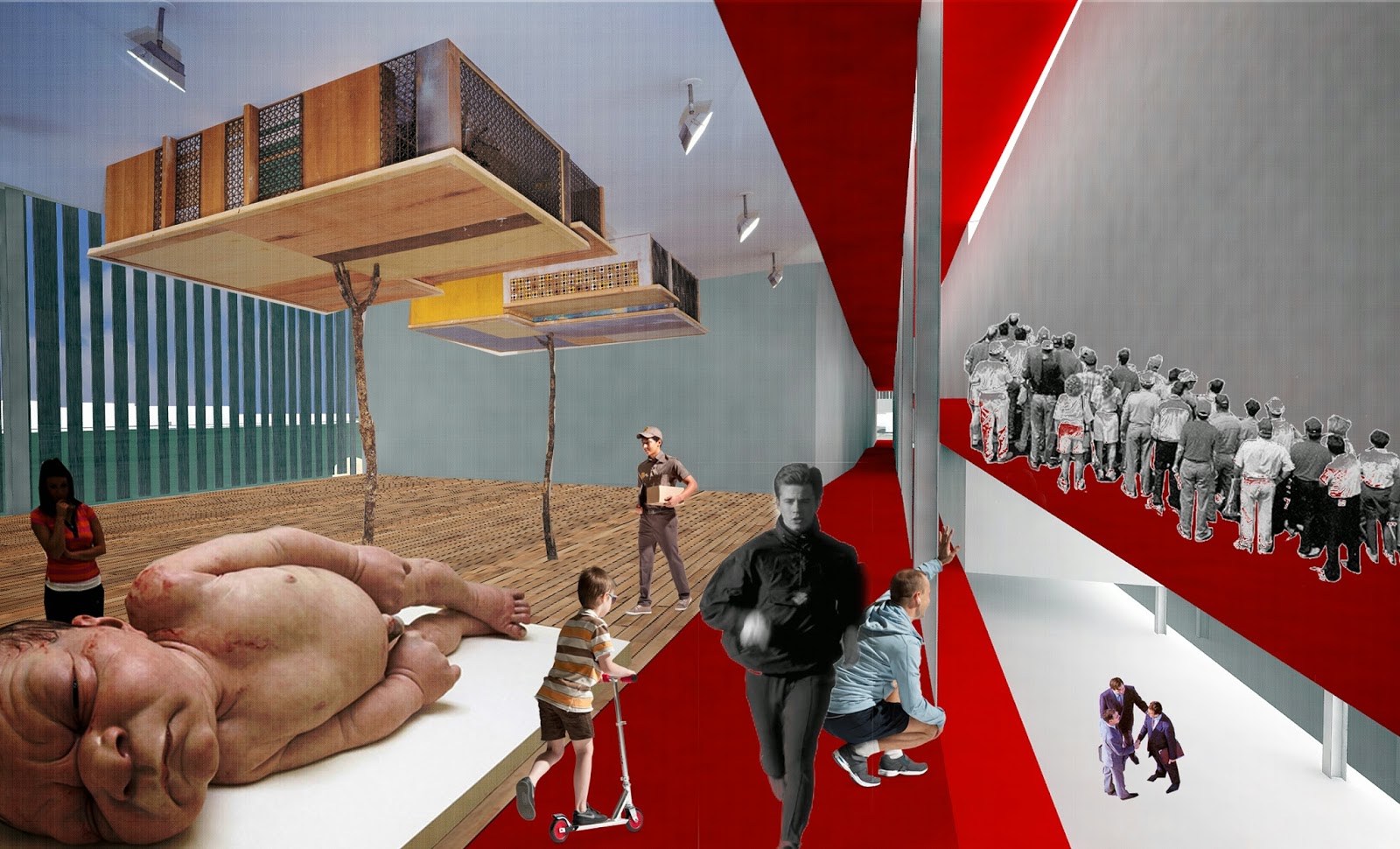 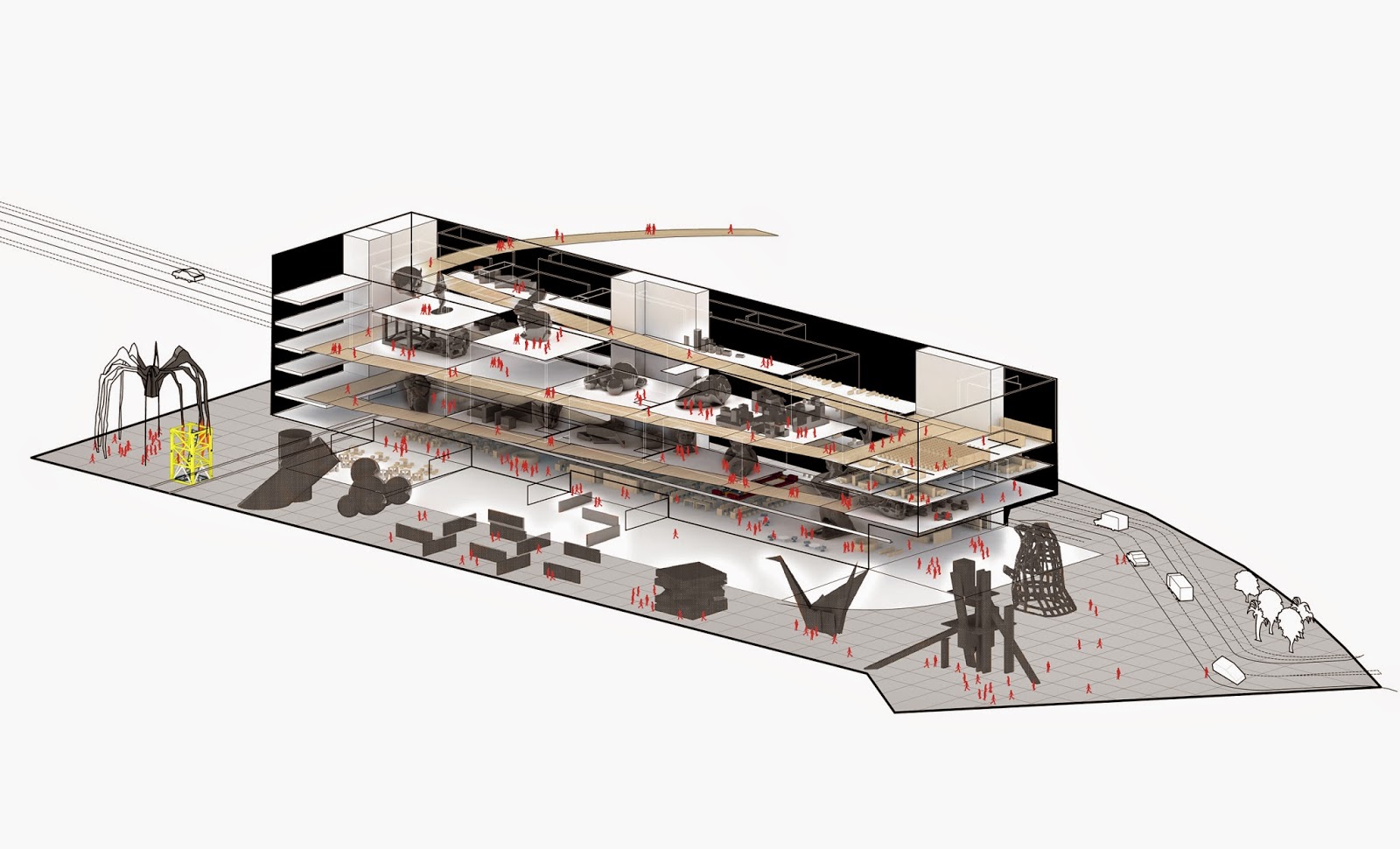 CITYSCAPE
The connecting act between the city’s program, the port’s continuity, Guggenheim’s ground floor and floating galleries’ volume is the continuous ramp (5% slope), which starts from the entrance of the Museum and ends at the top of it, leading to Tahititornin Vuori Park through a footbridge. The urban ramp is thus providing the Guggenheim with two entrances and connects it directly with Eteläsatama’s cultural routes and networks. The continuous route Park-Guggenheim- city port, and reverse, sets the Guggenheim as another major urban sequence within Helsinki’s expanding cultural structure, which can be experienced by local urban dwellers and visitors as an integrated part of their everyday routines or touristic agendas, and not merely as a standalone attraction. 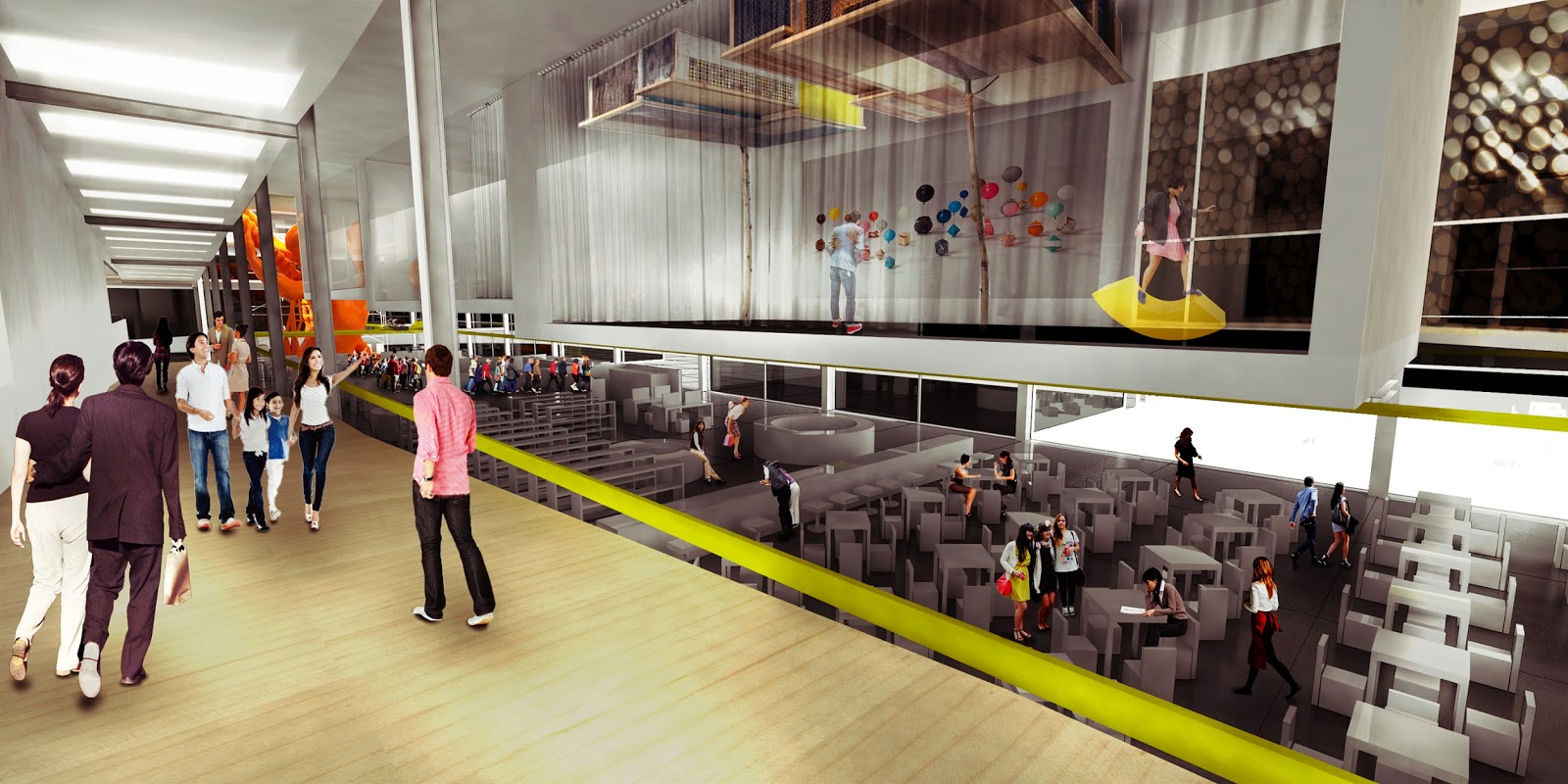 GALLERIES
The galleries of the museum range in size and qualities of interior spaces, in order to fit a multiplicity of curatorial concepts and media of Arts. The galleries which are located on the lower part of the building are strictly protected by any daylight and are smaller in size, so they can host smaller and more sensitive exhibits. Instead the galleries located on the upper floors are larger and their daylight conditions are regulated by the technical mechanisms of the roof. Those large galleries are appropriate for large scale installations and collective performances/gatherings. All galleries are connected by the smooth and wide ramp running through all the buildings, as well as by the 3 central cores. SUSTAINABILITY
The design of the museum suggests a compact and hyper efficient building, which exploits in the maximum Finland’s construction materials, such as timber, local stones and steel. All the interior spaces are clad in wooden finishes and are protected by the thermal properties of the timber trunks of the façade. 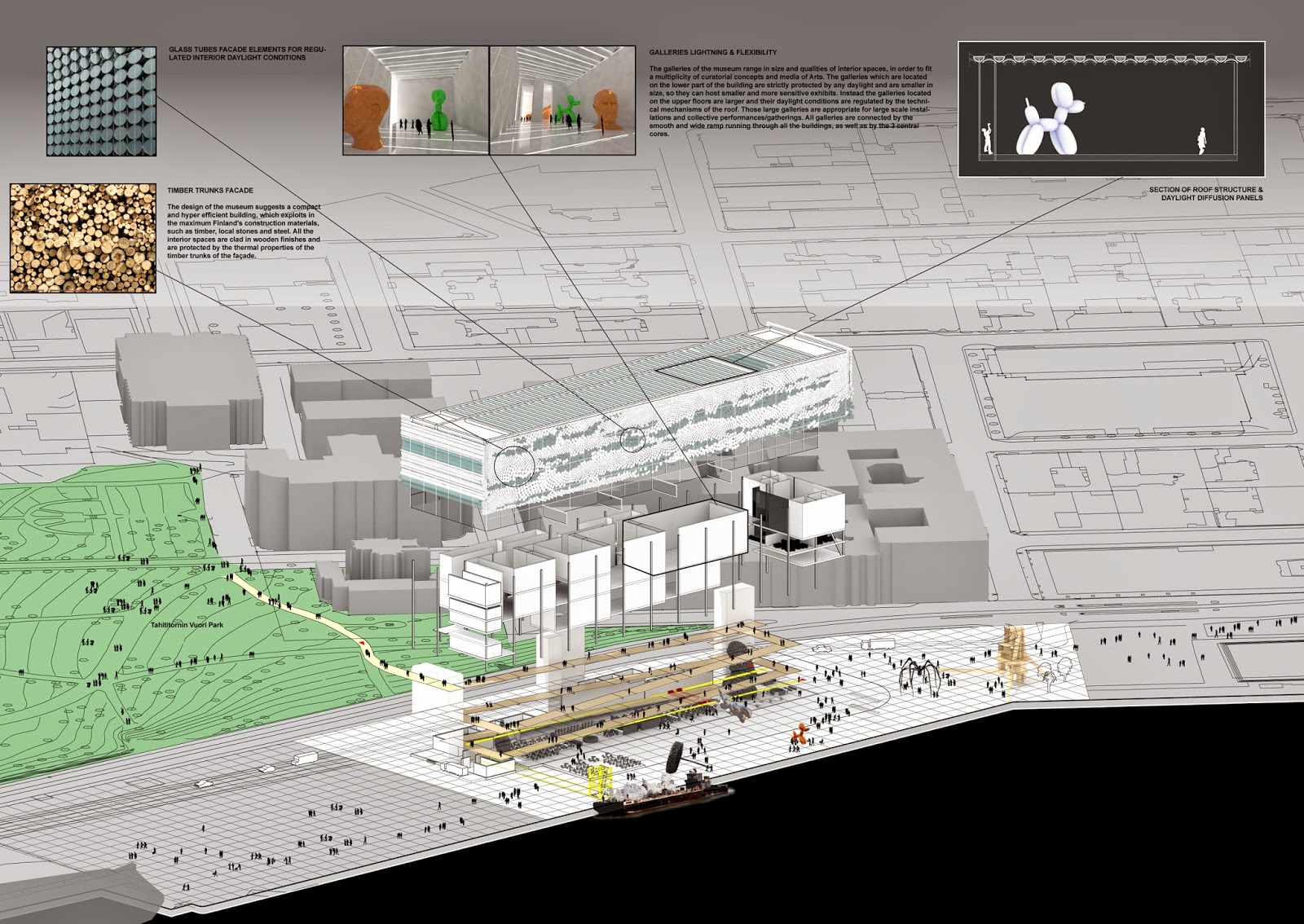