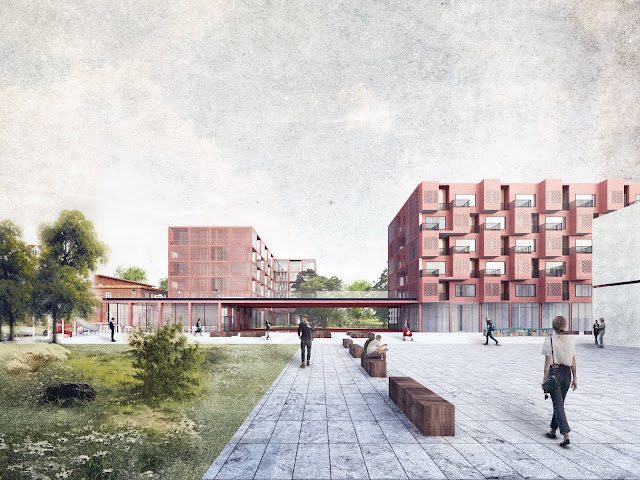 The city of Rybnik has a strong identity based on its history, industrial heritage and medieval urban fabric. Its historic centre is both picturesque and modern, it combines dense urban districts with green parks, riverfronts and significant landmarks scattered in close vicinity. Part of the city’s future development, the site for the new residential and services buildings at Ul. Gen. J. Hallera street is a strategic plot in the heart of the city centre that is currently empty and creates a discontinuity in the urban fabric. The site carries the challenge of becoming a strong urban connector between the northern and the southern parts of the historic centre, namely between the main square of the city, the market, the Magistrates Court and the other important buildings in the immediate surroundings. The construction of the residential blocks A, B and the new public spaces around them can generate a new reference point in the city, provide public uses that can stimulate vibrancy and offer a series of diverse public spaces and landscaped areas that can serve the citizens of all ages and preferences. The positioning of the two new buildings will define the way in which the site will be organized and will frame the urban connections between the public spaces that will be created. 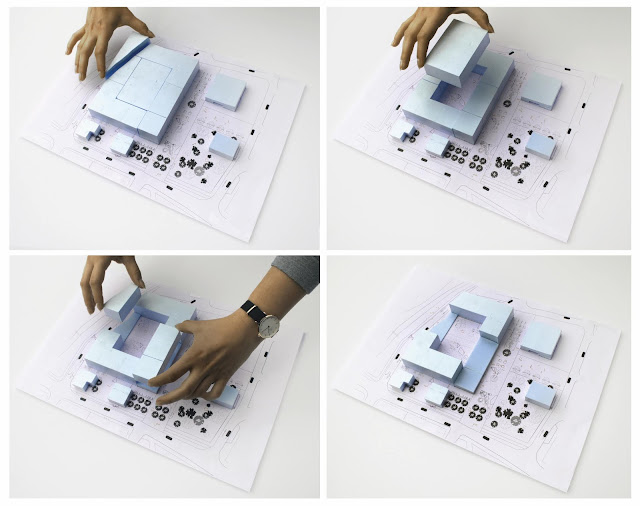 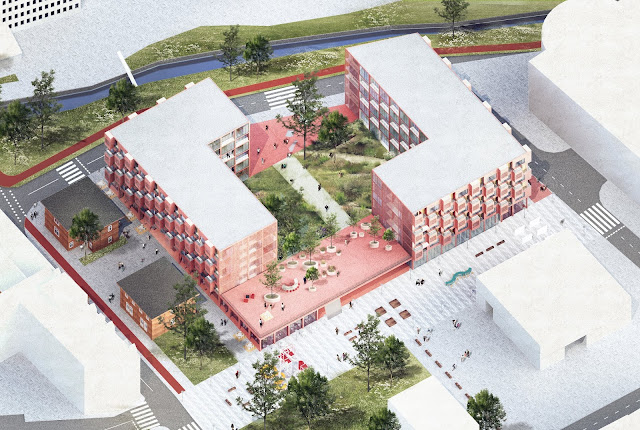 The residential and services buildings A and B are designed as two L-shaped volumes that form an clear urban block and enclose a green landscaped courtyard in the middle. The block is open on the two corners to allow for public access and create an urban connection between the Nacyna river on the west and the market on the south. The alignment of the two volumes takes into consideration the two historic buildings on Ul. Gen. J. Hallera street, the new multi-storey parking facility and the new Education Pavilion that are projected to be build on the site, as well as the other alignments that relate to the existing buildings and public spaces in and around the development. To further connect the buildings block with its context, the street no. 1 is designed to cross through the landscaped courtyard and connect with the street no. 2, which is framed by the Building B and is designed as a wide paved boulevard with trees, playgrounds, sitting areas and other activities along it. The project proposes a clear and efficient knitting of the urban connections and the building volumes on the site, in a way that they intensify the public character and interplay of iconic – yet modest in terms of building volumes - architecture in the city centre. 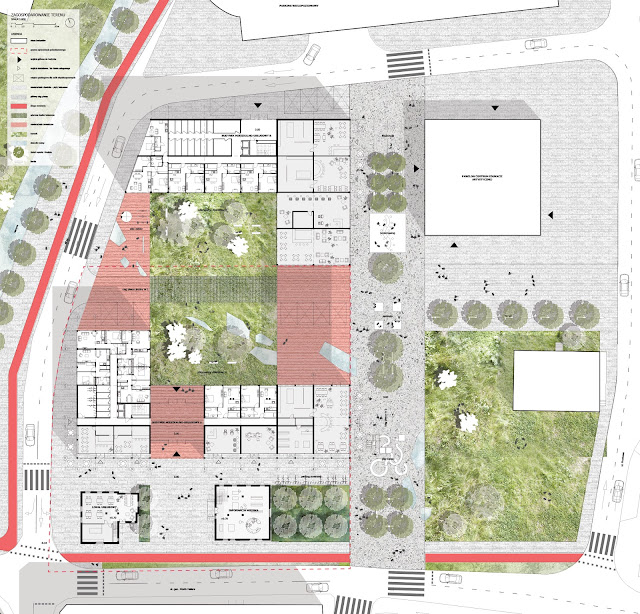 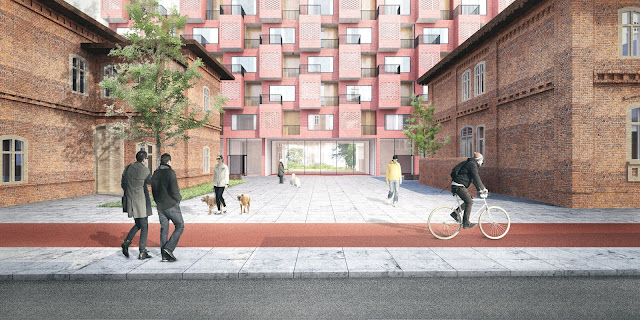 The proposal gives particular attention to the distinct character of the city, the important elements around and the integration of the existing buildings on the site, so that a sensible and sustainable result can be achieved that binds the area together. In so doing, on the western edge of the development the element of the water appears to make a connection to the Nacyna river, alongside the break in the volumes and the landscaping on the route from the river passage to the southern side of the site through the public courtyard. On the southern edge of the Building A, there is a wide passage on the ground floor that connects the courtyard to the two existing historic buildings that are preserved and restored to accommodate services. The facade of the new development is cladded in coral colour bricks and is monolithic and textured on the southern side to connect to and at the same time stand out from the two existing buildings, which are also cladded in brown coloured bricks and bear a monolithic facade. 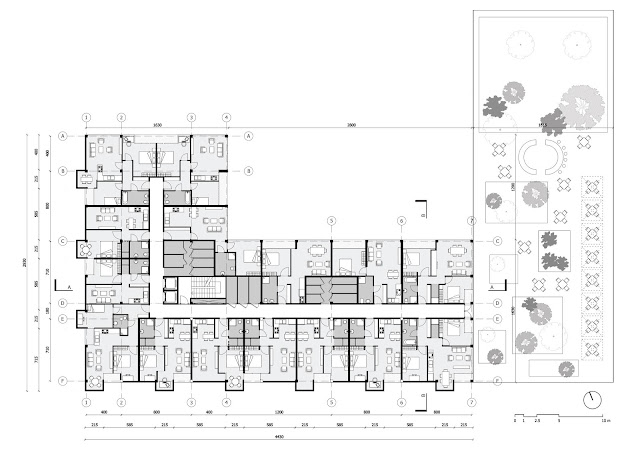 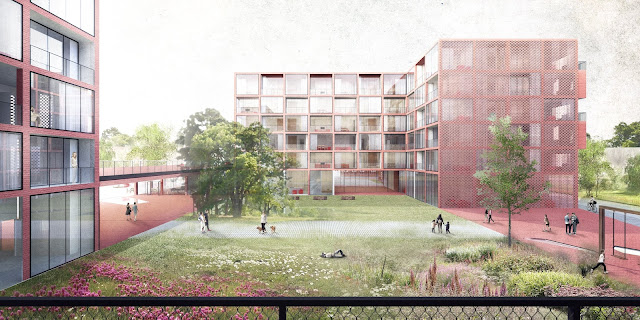 Both the existing buildings and the ground floor of the Building A accommodate services, so that the space in between them can concentrate people and generate urban momentum. The eastern edge of the development frames the new pedestrian passage no. 2 and the outdoors public activities that are developed alongside it, emphasising the importance of the site as an urban connector to the market and the Magistrates Court in the south. A second brake in the block’s volume between the Buildings A and B connects the street no. 2 to the landscaped courtyard through a wide roofed portal, while around this side services are planned for the ground floor to generate public flow and attractions for the visitors. 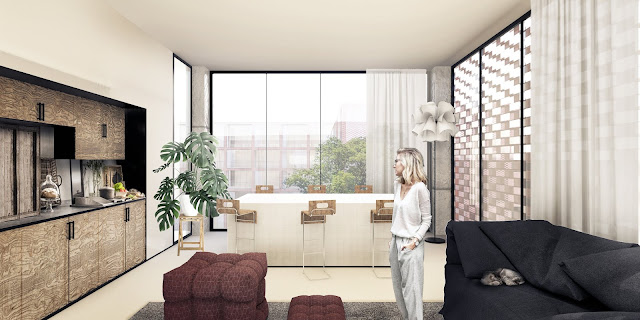 The main material used for the cladding of the block is brick, a material that refers to the industrial heritage and the particular character of the city. The coral colour of the brick, however, provides to the project a distinct identity, it makes it stand out and at times appear as a generic background for the existing buildings. The public spaces inside and around the block are paved with different kinds of Silesian natural stones, such as sandstone, granite, marble etc. Most of the urban furniture are designed as precast monolithic concrete elements often finished in oak wood in the sitting areas. The street no. 1 in the courtyard of the residential block is paved with permeable concrete blocks that allow the grass to grow in between, retaining the continuity of the landscape and ensuring the slow traffic of loading cars and the vehicles of the residents with disabilities. The interiors of the apartments are simple and robust, using strong material that are durable and aesthetically pleasing, such as terrazzo or wooden floors, exposed concrete ceilings, plywood cladded walls, white stuccoed walls and large glass openings that allow natural light and ventilation for each apartment. 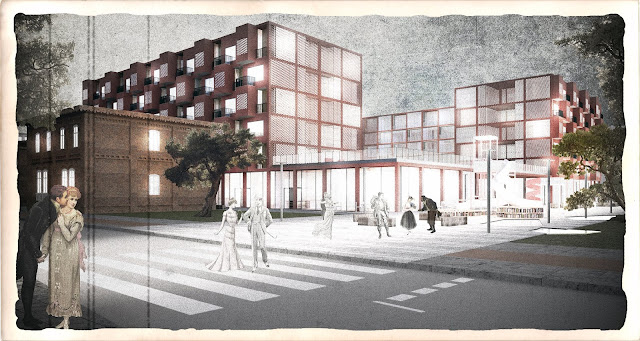