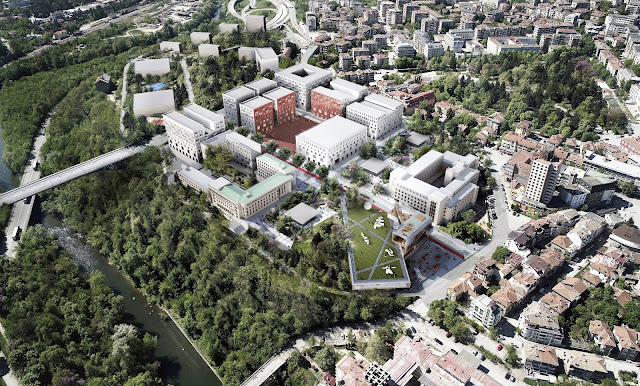 The master plan of the new urban centre (NUC) of Veliko Tarnovo is divided into four functional zones that are interconnected and each serves a different range of program, while together they form a unified urban tissue with a characteristic identity. The northern part of the scheme contains the zone of public buildings and landmarks, including the new Exposition Centre and the existing buildings of the University (VTU) and the District Administration. This area is green and contains generous public spaces for leisure and open-air activities, while large existing and new trees create shaded pockets and create framed views of the monumental buildings. In the middle of the plot there is the NUC, a rectangular tissue of urban fabric that has well-defined edges, high density and mix-use program. In the centre of this area there is a large central square that will become the new reference point of the city, while its variety of uses and functions will keep it active day and night. 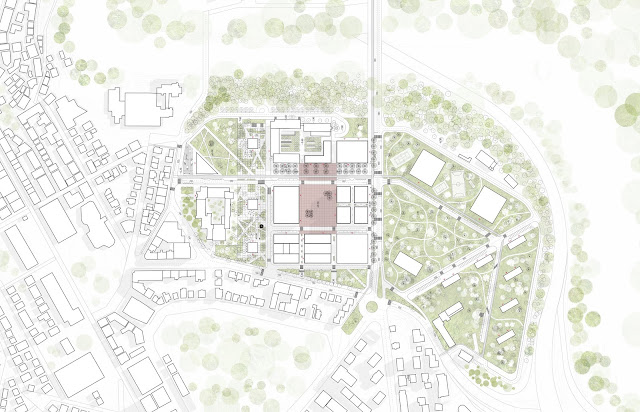 In the southern side of the NUC there is a triangular Park that incorporates several indoor and outdoor cultural and sports activities. This zone aspires to generate a green heart for the city that will be used by visitors and all the residents of the wider metropolitan area of Veliko Tarnovo, and it also features an organic network of paths and attractive natural elements. The very southern zone of the master plan is designed as a residential quarter, featuring compact housing blocks and extending the trees and greenery of the Park and the context around it. This zone adopts a commercial character as well, by offering significant percentage of services for the residents and visitors. The phasing of the master plan corresponds with the four functional zones mentioned above. The phase one will include the construction of the new Exposition Centre, the renovation of the facades of VTU and District Administration buildings, as well as the development of the green public spaces between them. The second phase would include the construction of the dense urban fabric of the NUC and the main square. The third phase will involve the development of the sports facilities and the housing quarter in the southern side, while last will be implemented as the fourth phase the landscape design of the Park in the heart of the scheme. 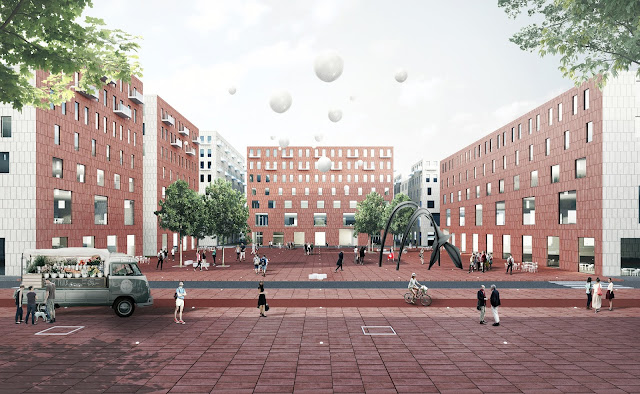 The massing of the proposed buildings for the master plan of the NUC is compact and features variations of density across the different functional zones. The northern zone of landmarks features low density buildings such as the new Exposition Centre and three small pavilions servicing the public space around them. The NUC is the most densely designed area with building ranging from 5 to 8 floors and 4.000m2 to 16.000m2. The rest of the master plan is designed as a green and low density area, therefore buildings are positioned in considerable distances between them, appearing mostly as follies scattered in the nature. 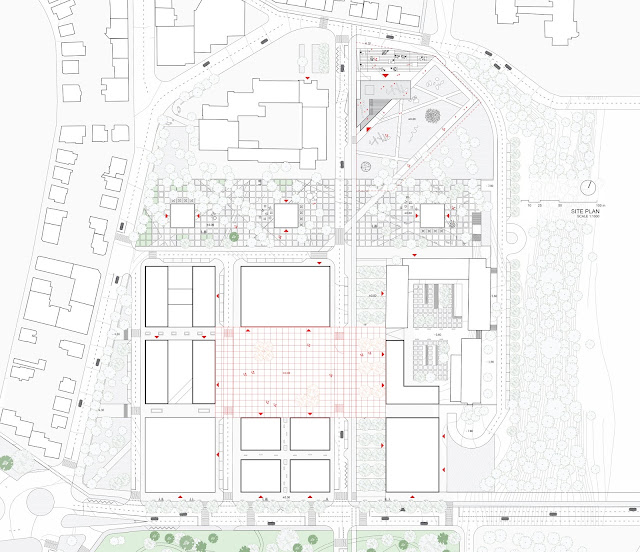 The distribution of the program is developed in such a way that none of the areas of the NUC remains inactivated throughout the day and during the year, therefore creating a mix-use scheme and a micro-economy all across the master plan. The public and cultural functions are concentrated mainly in the central urban area of the NUC, directly animating the main square and the other public spaces around them. The administrative functions are accommodated in new buildings adjacent and connected to the existing District Administration building. Commercial and services spaces occupy most of the ground floors all across the master plan and specific building or floors in the urban part around the main square. The educational facilities, including the proposed new library building, stand in the centre of the master plan around the main square as well, while sports facilities are positioned on the eastern side of the central Park. To maintain an active flow of people all around the public spaces, housing program and hotels are distributed everywhere and particularly in the south, where living in the green city provides maximum quality and standards to future residents and guests. 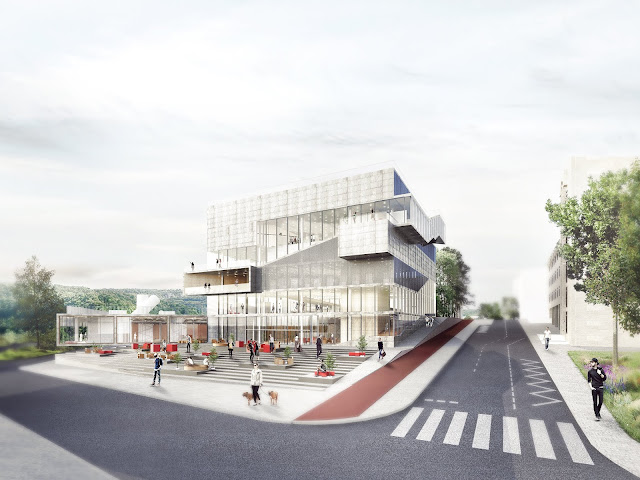 The master plan is based on an efficient roads system that minimizes the presence of cars in the new urban centre, so that the pedestrians and quality public spaces become a priority. Traffic solutions are however offered for the circulation of cars and public transport.  A wide street is proposed to run through the centre of the scheme to connect it with the modernist centre in the west and the historic in the east, while a smaller low speed street connects the New Urban Centre (NUC) to the north and south sides of the city. Smaller single-way streets are planned in the perimeter of the NUC for restricted access to residents and visitors, mainly to access the entrances of the underground parking facilities. All buildings of the NUC are planned to have underground parking floors providing more than 1900 spots, while the new Exposition Centre building also offers 120 underground parking spots. Several aboveground parking spots are also provided on the sides of the streets around the NUC.  A new bus line is proposed to run through the NUC offering suggested stops in the Main Square and the Exposition Centre. 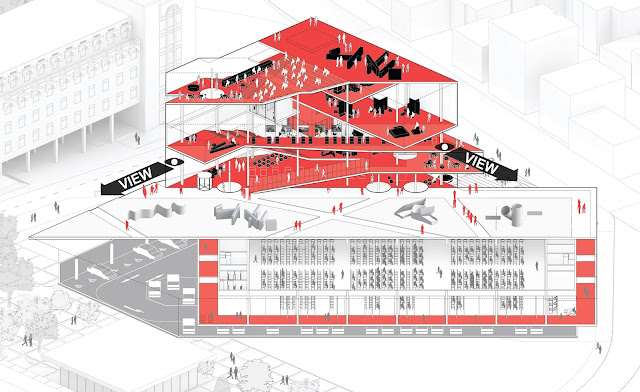 An elaborated network of new boulevards, sidewalks and cycling routes provide connectivity and direct crosses to the New Urban Centre, the main central square and the Exposition Centre. The wide boulevard positioned in the centre of the scheme addresses the primary public flows and functions as a connection backbone between the northern and southern poles of the master plan, while its intersection with most of the smaller paths and important public spaces generates urban vibrancy, clear views, efficiency of circulation and possibilities for activities. The smaller pedestrian paths crossing through the NUC are positioned on a grid and extend to the nearby context , while a diagonal crossing through the scheme provides direct connection from the city centre to the Exposition Centre through the main square and the ground floors of the neighbouring buildings. 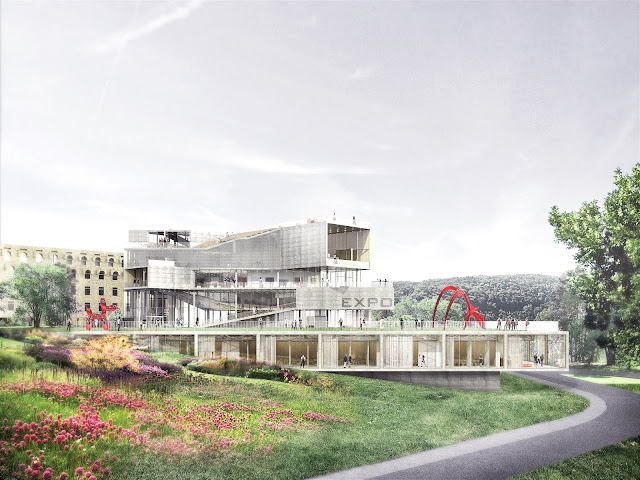 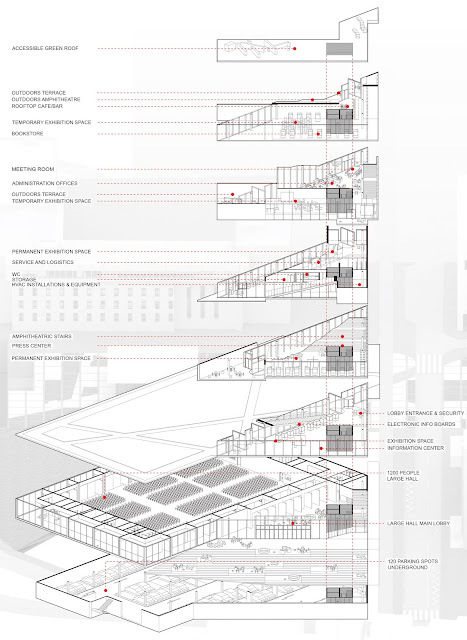 The city of Veliko Tarnovo has been long missing a formal urban centre and public building that can offer spaces and facilities for large commercial events, political gatherings and cultural happenings. Our proposal suggests the creation of a modest landmark, a compact building that offers a multifunctional large hall, exhibition areas and event spaces, while at the same time engages with its context and gives back to the city open-air green areas. The Exposition Centre is designed as a compact three-dimensional routing along different experiences for the visitors, while it connects the level of the street with the accessible rooftop and frames spectacular views of the city and the surrounding nature. 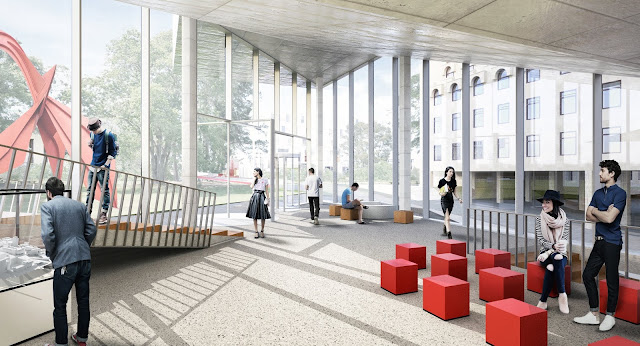 Due to the height difference of the site, the Exposition centre has two main entrances- one from the street in the north and one from the NUC in the south- and two interconnected lobbies – one for the Large Hall and one for the exhibition spaces and visitors services. The ground floor of the building features the Large Hall for 1.200 people and all the relevant services to support its operation. The Large Hall is a multifunctional space equipped and flexible to host large events and up to six smaller ones simultaneously. The roof of the large hall is green and accessible to serve as a public space and outdoors exhibition space for the building operations. 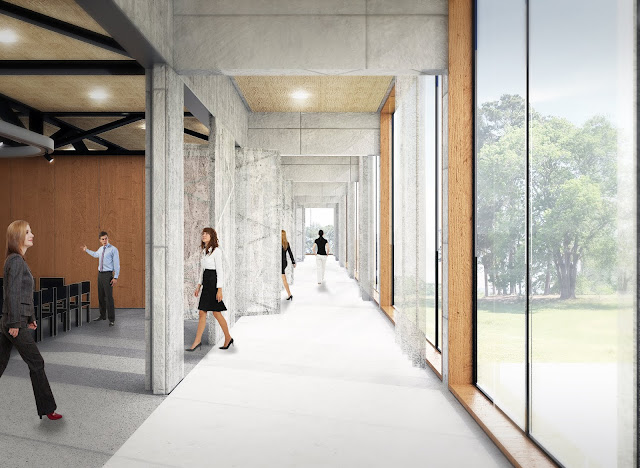 The first floor of the building serves as the Main Lobby when the Large Hall is out of operation, and it hosts temporary exhibition spaces, interactive boards and a souvenir shop. Large step-ramps lead the visitors to the second floor where the permanent exhibition spaces, press centre and large terraces for rest and observation are located. The visitors can access the third floor through the large amphitheatric staircase and visit the permanent exhibition dedicated to the history of Veliko Tarnovo while enjoying the impressive views to the city and the landscape. On this floor sanitary facilities, storage and equipments spaces, changing rooms and services spaces are located as well. On the fourth floor visitors can enjoy the thematic temporary exhibitions while the staff workstations are also located on this floor. On the top floor there is a café, a bookstore, a small exhibition space and a generous open air amphitheatre for small events overlooking the skyline of the city. The rooftop is accessible to function as an extension of the outdoor amphitheatric stair and enrich the network of outdoors spaces and terraces. 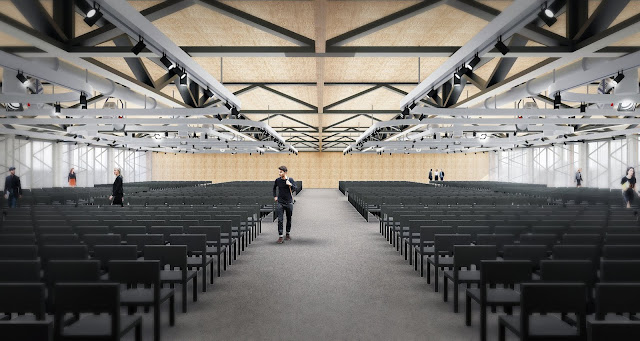 The quality of public spaces and their capacity to offer a wide variety of events and activities has been a priority of the proposal. A new main square has been positioned in the heart of the NUC, which is surrounded by large mix-use buildings that frame it, define its outline and animate its space. The square is 3.965m2 large and can extend beyond the low traffic streets that surround it to a total area of 5.950m2, hosting different kinds of large urban events and becoming the central square of the city. On the north side of the square there is a 10.000m2 stripe of green public space with large trees, paved areas and small structures serving coffee and leisure activities, at the same time functioning as a buffer zone between the NUC and the public buildings of the University and the new Exposition Centre. The roof of the Exposition Centre is also green and serves as an outdoors exhibition space for the activities of the building and the nearby community. On the southern side of the master plan there is a large triangular park that is surrounded by several cultural and sports facilities.

The main intention of the proposal is to accommodate the requested dense program and building masses in the most efficient and compact way, so that the original green and landscaped character of the site is preserved and further enhanced as much as possible. The NUC appears as a compact urban tissue that is surrounded by tall trees and vivid greenery, while most of the other buildings of the master plan are scattered in the nature and maintain a modest presence. The design integrates most of the existing trees of the site and suggests the plantation of new ones, aiming to diversify the species and provide shaded areas of activities for the local residents and visitors. Trees are mostly planted in spontaneous and irregular patterns to contrast with the rigidity and the compact character of the NUC, except of the cases of the two main boulevards, where they are positioned linearly to emphasize direction and perspective. A livable city is a green city, since greenery and trees in this case provide not only identity but also facilitate the uses and the activities of the public spaces.