‘Planet Lem’ Center of Literature and Language in Krakow 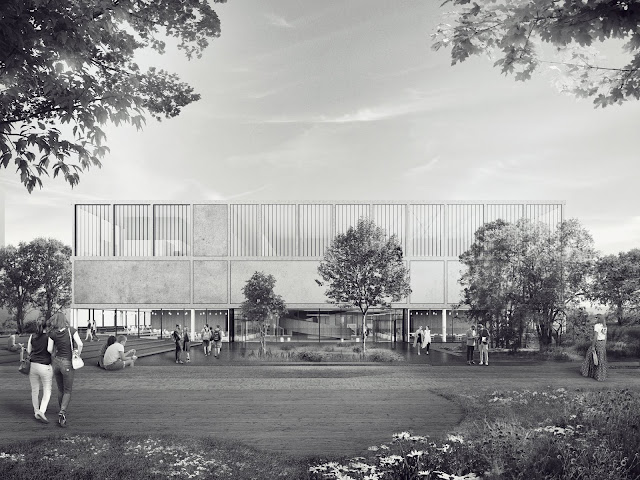 The Center of Literature and Language ‘Planet Lem’ is located on the historic 13th-century salt road from Wieliczka Salt Mine and the important site of the Salt Depot, which have always formed a communication and language exchange route. The sensible and compact extension of the existing building and the creation of green open public spaces around it aspire to regenerate the whole site and turn it into an important cultural laboratory for the city of Krakow. The new building is positioned on the back side of the Salt Depot followed by a new green square that is surrounded by trees and stairs. This public space is themed as the "Garden of Languages", a place where numerous open-air events, exhibitions and workshops will be organized. A linear pavilion facilitating such activities is also positioned on the eastern side of the garden. The public space in front of the Salt Depot was arranged as a representative square with elements of greenery and sculptures referring to the works of Stanisław Lem. 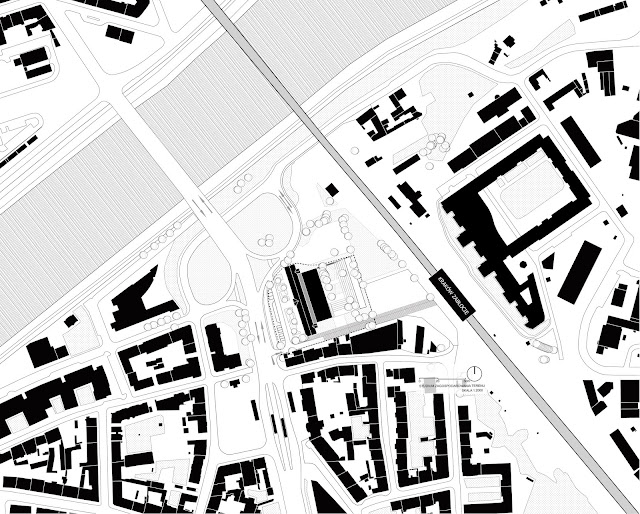 The main access by car and busses to the site will be provided from an internal road on the west side, which provides drop-off, parking spaces and a ramp to the underground garage. The access from the train station on the eastern side of the plot is designed as a boulevard filled with information about Polish language and tradition. The volume of the new building is compact and modest, yet elegant and symmetric to perfectly match the restored elevation of the Salt Depot. Both buildings are connected by a linear circulation zone merging their ground floors, so that after passing through the historical object visitors are led into the open and glazed hall of the new addition that houses the foyer and visitors’ services. The transparent façade of the new addition opens up to the "Garden of Languages" and the open-air pavilion for workshops on the eastern side of the plot, creating a public continuum and a continuous flow between the activities offered to visitors. 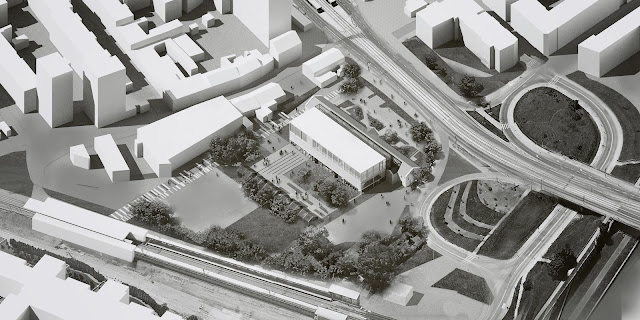 The two main entrances are located on the west side for the old building and east side for the new. They are connected through a linear circulation "backbone" placed between the two buildings that creates a continuous flow between the old building and the new one, while containing staircases and elevators that enable communication of both parts of the project. The "backbone" functions also as an urban billboard for the whole project, while it provides panoramic views to the city towards the west. The new addition resembles a partly glazed cube that creates an abstract background to the Salt Depot. The ground floor of the new zone is 1 m lower than the level of the ground floor of the historical object, to create a more comfortable and monumental foyer. In the newly designed object, the ground floor has been designed as an open and transparent space that contrasts to the old building and visually connects the foyer with the outdoors spaces. An important element of the foyer is the circular stair that leads the visitors directly to the dedicated exhibition room where they meeting with Lem. 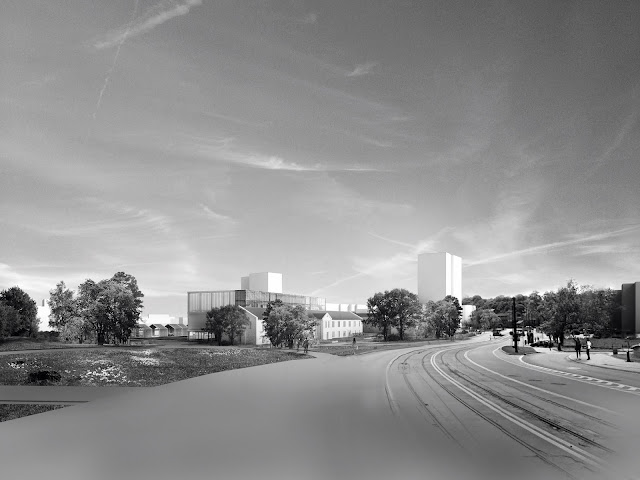 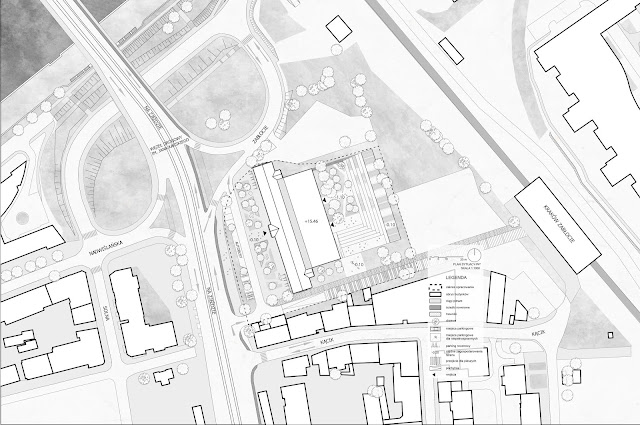 The design proposal suggests an organic connection between the historical building’s two floors with the newly designed part of three over-ground and two underground levels. The preservation of the historical Salt Depot building and the display of its assets has been an important aspect of the design strategy by placing the administration offices on the ground floor of the building, alongside the cloakroom and main sanitary services for visitors. The main exhibition dedicated to the work of Stanisław Lem occupies the first floor of the historic building, whose floor plan was cleared of the excess columns and its roof structure was revealed. The exhibition is continued in the new part of the building, while both parts are connected by the existing stairs of the Salt Depot and the new circular stair added in the foyer of the new building. Two zones of storage spaces on the southern and northern sides of the exhibition create isolation and frame the symmetric floor plan. 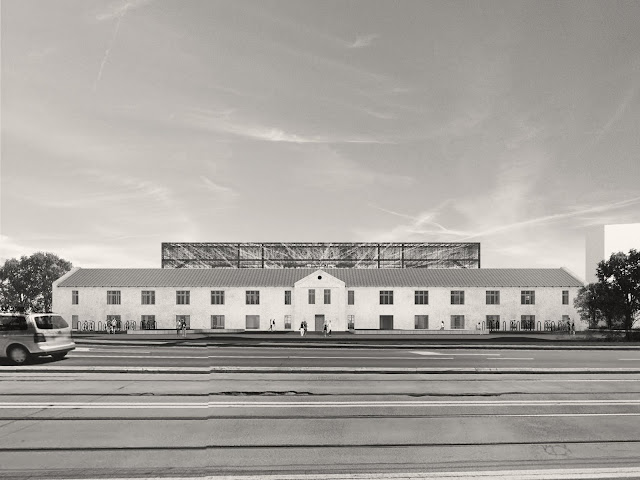 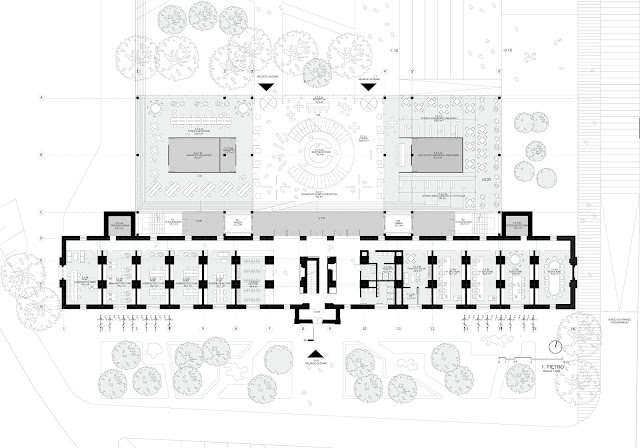 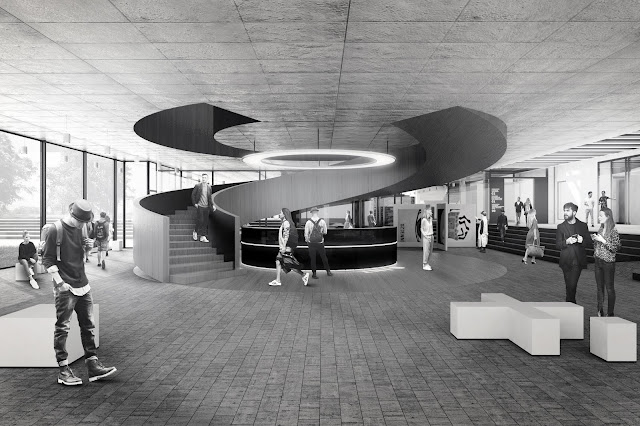 On the ground floor of the new building we can distinguish three important zones: the temporary exhibition, the multimedia space and administration offices, while there are also workshop rooms and multimedia studios on the first floor. On the 2nd floor, an auditorium hall for 400 people was designed to give the possibility of division into two smaller rooms. On this floor there is also the backstage, a library zone, storage rooms and toilets. On floors -1 and -2 located under the new part of the building, an underground parking for 109 cars with technical rooms was designed. All rooms have been designed taking into account the needs of disabled people and the requirements set by the organizers of the competition. 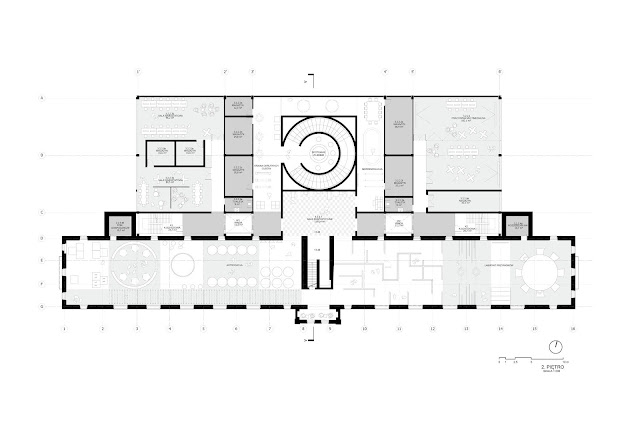 The exhibition is placed both in the new and the old buildings to emphasize on the metaphor of two different worlds, which are undoubtedly visible in the literature and life of Stanisław Lem. An important aspect of ​​the exhibition is the creation of contrasts that show the world of Klaupacjusz and Trurl, the two main characters of Lem's books and also the guides to the exhibition. The prologue and end parts have been specially placed in the new building to introduce an element of surprise for visitors. The first and second exhibition zones are located in the historic building, while the third and fourth parts are positioned together in the new building and in sequence to the final part of the exhibition: the meeting with Lem. The exhibition was designed in the form of a laboratory of experiences, a machine that opens with the discovery of successive layers of Lem's work. Each designed zone has many contrasting worlds referring to the author's life and his books, which we can see in the designed floor, furniture, and artistic installations. This exhibition is a space that can be easily modified and has a lot of flexibility. 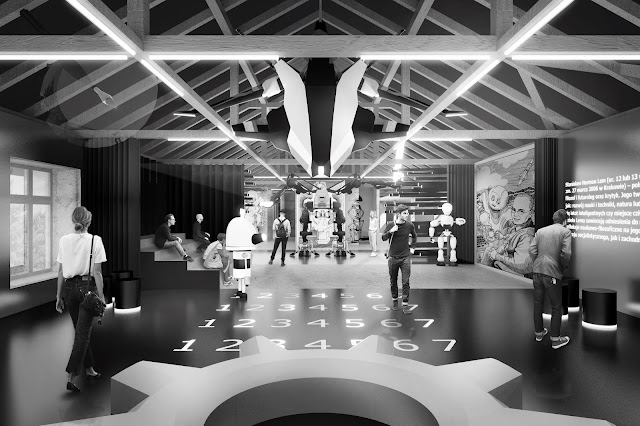 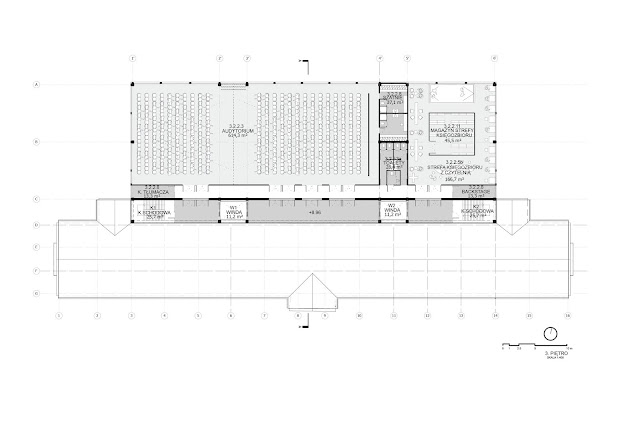 Visitors can begin the experience of discovering the exhibition from the historical stairs of the Salt Depot or from the lifts located in the main hall of the new building. The Prologue presents basic information about the exhibition in the form of a room as a living machine with numerous buttons, traps, puzzles etc. Next, visitors can go to the "Astrogation" zone located in the northern wing of the historic building - a space divided into six parts of various characters. In this part the visitor is in the space of a rocket, tunnel, magnetic field, inside the counting machine. In the southern part of the building, the "Labyrinth of chances" zone is located. The space is designed as a labyrinth featuring numerous holograms, robots and simulations. 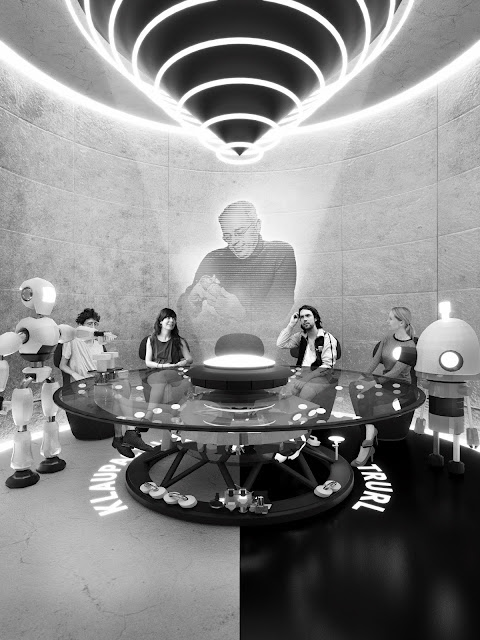 The third zone called "Nikroevolution" is located in the new building. It is a place with many interactive points: biological riddles, constructing fauna robots, playing with Lego blocks and a spacecraft designed as a tunnel with a rescue mission. The fourth space "Land of cruel wonders" was designed partly in the form of the planet Solaris (tunnel), which materializes the thoughts of guests. This zone also allows for interaction with robots. The final part of the exhibition, meeting with Lem, is in the central part of the new object, based on a circular plan that symbolizes inclusiveness and the monumentality of time and space. It is a library of knowledge about the author and his books, designed as a cosmic space in which the visitor comes in contact with Lem himself. From this room we have a connection to the ground floor by the circular staircase, which is placed around the room of Lem. It is a very important element for the entire exhibition, therefore it was highlighted so that it would be visible in the façade and organization of the entire building. 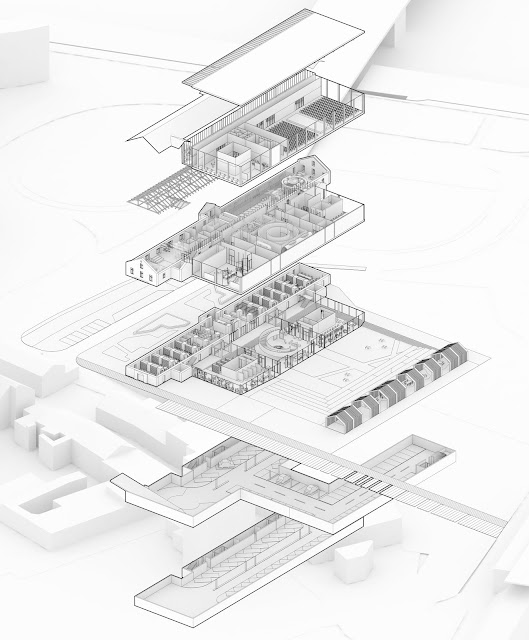